Did you ever have one of those days when you worked for ten hours or so, and, when you looked around at the end of the day, you seemed to have accomplished not one thing? That was my day. We start our second semester on Wednesday, so today was a workday. I had one section of finals left to grade, which I didn't even look at until I got home this evening (I just finished them), and I had planning to do for the upcoming term. But, honestly, the most obviously productive thing I did today was make coffee, and that was done by 7:45!

I guess I just chalk today up to one of those bizarre time warps, where things happen at a pace that seems normal to the person inside the time warp, but where things are actually happening at a much slower pace. However, if that were the case, and I were moving that slowly, I imagine that I would be really tired, right now. It's hard to move directly and slowly for an extended period of time (and I am talking about eight hours of almost perpetual movement (at least of the arms)). But, I am not tired...at least not overtired.

So, what is it? What happened today? Perhaps, as often happens on these "work days," a troupe of gr 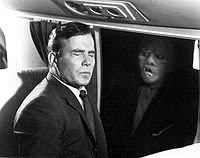 emlins imperceptibly undid everything that I had done almost immediately after I had done it, today. That would leave me with a sense of doing something, but having nothing to show for it. Hmmmm...that MUST be it.

Unless you have any suggestions.

***Twilight Zone still from The Stygian Port
Posted by ATR at 7:41 PM

Is this kind of like Groundhog Day but different?

You should have made more coffee, Mr. Perpetual Arm Movement. You would have been able to have pointed to that several times over and been like, "Look, I made coffee again!"

Sorry I can't be more clever. I'm trying to talk myself down from the PTSD reactions I'm having to all that maff. Or maff-like stuff.