A Break in the Rain (A Very Long Story, Part Seven)

Friday dawned with cloudy skies, but no rain. We were determined to use the "dry" weather to the best of our abilities, even if a few showers might intervene. Not wishing to put ourselves in a precarious situation, such as being in the middle of a hike on wet rocks, miles from shelter in the middle of a storm blowing in from the ocean (or from anywhere), we decided to choose a less "back country" hike for the day. But we didn't skimp on the length, let me tell you.

We chose to hike a carriage road, part of a grand network of gravel roads that snakes through the park and traverses several rugged stone bridges, called Around the Mountain Road. It was 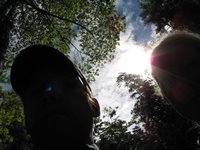 10+ miles that did, indeed, go around several mountains, Sargent, Parkman, and Penobscot being the three largest.

When we started our hike, we were elated to see the sun peek out from behind the clouds. Minutes later, actual blue filled the sky, accompanied by a few innocuous white clouds. The day was really shaping up, but we knew that storms were forecast for the afternoon, so we tried not to get too excited.

The loop around the mountain brought us to many of the stone bridges in the park. They are 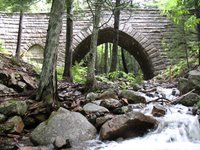 really amazing structures. Built in the 1920's, the bridges are cobbled from stone that was gathered on-site, and cut by hand as they built the roads. They are beautiful and solid, and they make for great photo ops. I'll bet they look even more spectacular in the fall, with all the leaves changing colors, and winter, in the snow.

Of course, the road is not just a single loop, it joins and intersects and twists around with a hundred other roads, so we had to make 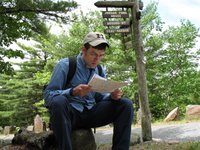 sure we were headed in the right direction often. It was a pretty good hike, covering some altitude (gradually) and giving us some nice views of the park in several directions.

After about one o'clock, the skies started to get a bit more ominous, which was okay, since we were very near the end of our loop. The last mile was a bit of a slog, since we were really now just interested in beating the weather, but the last leg of the hike was 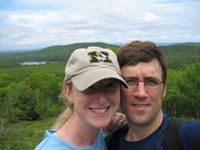 probably the best in terms of visual enjoyment, we were up around eight hundred feet, and right along a ridge, so the views down into the valleys, coves, and fjords below were really quite spectacular. This shot was obviously taken just as the sky started to cloud up and darken, you can still see a bit of blue in the sky.

We shuffled in to the parking lot and decided to find this deli we had heard of in the town of Northeast Harbor. Too bad for us, at 2:30, the sign on the door said "Closing at 1 Today." Oh well, that's what happens when you visit before the real "season" starts. We went to some not-bad sandwich place in Bar Habor, and then headed back toward Ship Habor (where we were on Wednesday) to walk the flat, ocean-side Wonderland Trail. Between the end of the hike and the end of lunch, the weather had deteriorated quite a bit. 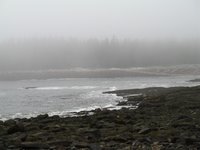 The atmosphere at Wonderland (don't know why it's called that) was very much like Wednesday's, only a bit colder and a bit foggier. We scanned the rocky beaches, looked out into the fog for ghost ships (a la the Marie Celeste or the Flying Dutchman), and talked about what we would do with the weather tomorrow. It was not looking good. Not looking good at all.
Posted by ATR at 8:00 AM

Lovely pics and cliff-hanging adventures, ayuh! I can't believe I'm all caught up with your posts and I'm left still up in the air. I'll have to tune in again tomorrow!

Welcome back, Anon AMVB! Hope you had a bon voyage!

Two fjords in one Monday (in America) IS spooky. In Norway, not so spooky, by yimminy!

aucfwqje (wow, that's a long one!)