Where the Wild Things Are, Part Two: Marmots and Downpours and Bears, Oh My!

After some cereal at HQ, we headed for our first foray into Rocky Mountain National Park itself. We planned on hiking farther along the Glacier Gorge trail, where we had taken a short hike on our last day in Colorado, last year. Instead of Mills Lake, a two-plus-mile hike, where we ended in 2008, we planned to push on to Black Lake (and possibly beyond).

Like last year, this was one of the more beautiful hikes we took. It is hard to really assert that one hike is head and shoulders better than another, although last year's hike to Chasm Lake was a particularly magnificent experience, in many ways, the lakes, falls, and views of surrounding peaks in this area of the park are excessively breath-taking at times. 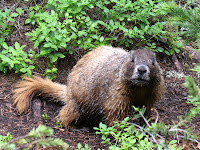 The beauty of Mills Lake was no surprise, having been there before, but the trail beyond was less crowded and equally magically. I fell behind the group on several occasions, taking pictures, or just marvelling at the sights. In addition, we had a close encounter, at one point, with one of the park's ubiquitous, and clearly unafraid (and misnamed) yellow-bellied marmots. We would encounter multiple marmots on this trip, as well as sightings of larger mammals that would trump this eight-pound rock chuck, but, at the time, we all enjoyed our brush with this distant relative of Mr. Chubbs. 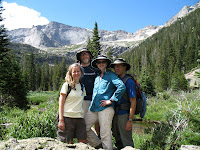 At one point on our hike, we came to an open area, a rushing mountain stream beside it, where I had one of those often sensed moments of awe. My first thought, voiced to Monkey, was, this is where I want to live. It is a silly, impractical, and impossible thought, but, in those places of exquisite natural beauty, I sometimes wish to just lie down and stay forever. Instead, we all gathered for a timer-aided group photo.

On we climbed, pausing for a snack at the slightly mosquito-y Black Lake. Another fabulous 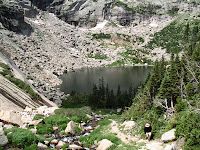 alpine lake. Miles beyond, we might find Frozen Lake, and Italy Lake, but it was clear that the time of day and gathering weather would probably not allow for that. Instead, a detachment of our party climbed a steep trail alongside Black Lake's feeder stream, which fell some distance from the ridge above. At the top of the ridge, a bit of exploration revealed the impracticality of carrying on, but also introduced us to the not-too-distant beginnings of the rocky slopes leading up to Longs Peak.

At this point, some of us decided that we would try to attempt to scale Longs Peak at some point during the week, weather permitted. This sent waves of excitement (and not a little trepidation) through the group, considering that Longs is a challenging, but commonly attempted and scaled, climb to the top of Rocky Mountain National Park's highest peak (14259 feet).

So, with a forward-looking jaunt in our step, we proceeded back down the trail, toward our original departure point. As we approached Mills Lake, the skies opened up, and we trudged most of the remaining 2 and a half miles in a steady, and sometimes heavy, cold rain. One of our party's members was inadequately outfitted for such weather, and, while she remained stoic, was clearly not enjoying our final hour or so of descent. But, returning to the Penguin, we tried to make each other as comfortable as possible for the remainder of our trip back to HQ (which included a supply excursion into Estes Park).

As we four-wheeled our way up the unimproved road back to our powerless cabin, one of the most magical moments of our trip occurred. Mrs. Ambassador shouted "Stop!" I stopped the vehicle. "Back up," she said. Okay. We had just seen a beautiful orchard oriole at the base of the ridge, so I thought she might have spotted some other interesting bird. I backed up, looking into the yard of a cabin along the road. I didn't see anything. "More," she said. I rolled back a few more feet. There, standing on all fours beneath an array of bird feeders in the front yard of this cabin, was a medium-sized black bear! He stared at us. We stared at him. No one had a camera. Mrs. Ambassador scurried into the way back of the Penguin to get her camera. Just then, the bear turned and casually loped off over the hill. It was amazing, and I am glad we were in the car.

That evening, I kept one eye peeled as I grilled some burgers on the patio of the cabin. We were pretty far from where we sited the bear, and on the other side of a ridge, but I still felt just a little wary about any black bears smelling a juicy burger cooking. I mean, if you spend most of your time eating berries and bird seed, wouldn't a nice burger, followed by the chef, be a fulfilling diversion? I thought so. Lucky for me, Mr. Bear did not come calling.

Unfortunately, we never saw it again, the rest of the week. For those keeping track, that means that last year, Monkey got to see her moose on the Front Range, and this year, she got to see a bear. There is no conceivable way (currently) for her to see a whale there, so she will have to look elsewhere to fill her "Trinity of Wildlife Sightings," but two out of three ain't bad.
Posted by ATR at 12:15 PM

T, have you all been snowshoeing before in RMNP? If not, I think you would enjoy snowshoeing the same trails you have hiked. The fun thing about snowshoeing is that there is no trail so you get to choose your own path, which in some cases means you can cover more ground in a shorter period.

I'm jealous because we did not see any bear or moose during our 13 months of Colorado exploration.

Wow! This is very exciting! And I can see you being edgy about the bear for the duration of your time there.