Where the Wild Things Are, Part Three: Lost Mines

Our next two hikes were adventures of the highest order, in which the groups survival skills, organizational skills, and ability to sacrifice for the good of others were tested intensely.

A short hike to Lost Lake was our Tuesday hike of choice. We 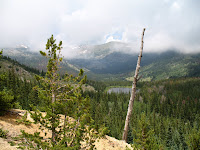 headed through the towns of Nederland and Eldora to the Hessie trail head. In reality, we didn't drive to the Hessie trail head. Instead, we parked along an unimproved road (precariously close to a significant drop off), and walked to the trail head, due to the destructive capabilities of those most industrious of rodents, the beaver (I will spare you the plot of our group's extemporaneously devised feature-length animated "film": Chainsaw Beavers).

Beaver dams had caused extensive flooding in the valley below, submerging the road for a length, and making the auto route impassable to all but those with the highest clearance and/or the most fool hardy. So, our two-mile trek was actually more like two-and-a-half, when all was said and done. And, to tell you the truth, the first quarter mile of the hike was made all the more beautiful by the flood waters of the beaver dams.

On the other side of the flooded road lay a wide open space, the ruins of what was once the town of Hessie. Apparently, the town was the headquarters of those who serviced the mines in the area. One of those mines was at the top of the trail we were about to travel. In the clearing, besides some lovely mariposa lilies, we found an abandoned well, and some foundations, but not much else.

We hiked in a generally upward direction (we gained about 800 feet on this hike), circling around a waterfall, and through some lovely wooded areas. As the trail finally crossed the falls, after a split in the trail, the walk got even more interesting, as the trail followed what seemed to be an old corduroy road, with old logs still lined across it. It is possible that this "artifact" of history has a more contemporary origin, but the idea that mule teams from the vanished town of Hessie below may have trod these same roads added a mythical quality to this part of our hike. Not to mention some more beautiful cascade views.

At about 9800 feet, we came upon Lost Lake. I stopped to take some pictures at the shore. When I was finished, the rest of my party was nowhere to be seen. I proceeded up the trail, expecting to find them around the next bend, enjoying some trail mix and taking a break, but that didn't happen. I walked completely along the shore trail, and didn't see anyone. I walked back, thinking maybe I missed them somewhere along the shore, but where? Finally, I walked back up the trail, stopping to walk down to the shore to several hidden spots. At one, I finally came across two-thirds of my mates, sitting on a rock and shooting the breeze, but where was our final member?

I'll admit, I was a little angry at this point, I maybe was a bit short with my compatriots, especially when they said they didn't know where our fourth was either. The three of us walked up the trail, to no avail. I sent them back to the end of the lake and told them I would be back with or without our fourth member, in twenty minutes.

I double timed it up the trail, arriving at an area we had spied from below earlier in the day. At the top of this portion of the trail, a gigantic field of mine debris was spread along the ridge. Visible from miles away, I was sure that our missing companion had come up here for a little exploration. Which he had. We stayed up top for a few minutes, taking pictures and poking around, before heading back down to reunite the party.

I was still not happy that we had gotten separated, but I was glad that we were all together again. The weather was again building as we crossed the beaver flood and climbed the road back to the car, so, we called it a day, went back to the cabin, showered up and headed down to Boulder for dinner. A nice visit to a hip town, but the most remarkable thing was the snow we drove through on the way home. It was a wacky weather trip.

I'll tell you all about our second "intense" hike, tomorrow.
Posted by ATR at 1:06 PM

I know just the feeling about wanting to lay down and stay forever. I always tell myself that I can't live there because I never want to stop enjoying it or take it for granted. It doesn't make it any easier to leave. :)

Intense indeed! I was getting nervous just reading this. Oy. I'm glad it ended up being uneventful.