Where The Wild Things Are, Part Five: The Bear Trap

The start of contract time has curtailed my blogging the past few days, but it is my intention to 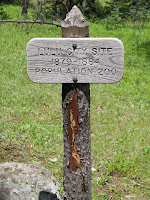 offer finish this multi part story as soon as possible, beginning today with the story of our hike to Lulu City, a former mining town that thrived for only four years in the mountains of Colorado before succumbing to the economics of the times and becoming a ghost town known mostly for its still-visible bear trap (of which, I neglected to take a photo--I didn't realize it was such a famous bear trap until afterward...hell, I didn't even know it was a bear trap, at the time, but, I digress).

The morning of this hike, we intended to mosey into Allenspark and eat at the wonderful Meadow Mountain Cafe. When we arrived, at exactly the time that they opened, we found the small parking lot full, and the small dining area fuller. Not wanting to wait too long for a table, some coffee, and some food, we decided to head into Estes Park for an alternate breakfast experience.

After a not-so-good-as-Meadow-Mountain-would-have-been breakfast, we drove over Rocky 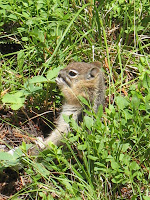 Mountain National Park's Trail Ridge Road, to find the Colorado River trail head, on the other side of the Continental Divide. This trail is relatively level, until the descent into/ascent out of the Lulu City site, and follows the Colorado River for a distance, revealing along the way several mine shaft sites, and the ruined cabins of the man who once owned the mines (I believe his name was Shipler). It was a nice trail through riparian wetlands and wild flowers. Earlier, one of the Ambassadors had purchased a book on RMNP wild flowers, so we had a fine time trying to identify some of the more common flora along the trail. Unfortunately, the wetlands also breeds some local mosquitoes, so we didn't stand still over the flowers for too long.

Once we arrived in the vicinity of Lulu City, we discovered that the only living inhabitants of the 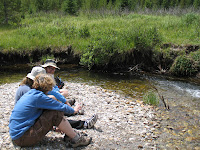 site are golden-mantled ground squirrels. We debated whether it was a good idea to feed the squirrels pumpkin seeds (we decided not to), and whether a golden-mantled ground squirrel was any match for a chainsaw beaver (of course, not). Most importantly, we found a beautiful river bank of stones in a river, upon which to have a mid-day snack. It truly was one of the more beautiful places we spent time (of course, there were many of those).

Of course, on our way back to the trail head, it rained. The only difference was that, today, 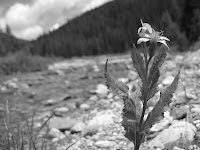 everyone had adequate rain gear. Hooray! The backs of my pant legs did get awfully drenched, however. I think next time, I am toting my rain pants, as well. We stopped by the Ranger's Station after the hike, to get a last check on the weather, but it was not good news. The weather we had been having, we would continue to have, and that, we all decided, was not conducive to scaling any 14000 foot mountains. So, with disappointment, we scrubbed our Longs Peak hike for that trip.

That left us with a decision to make about our last hiking day in the area. Where would we hike? How far? How high? How early? We spent the evening, over dishes of not-very-good Tuscan bean soup (my fault), discussing our options.
Posted by ATR at 11:53 AM

T, let me know when you summit Longs Peak. It appears to be a big time challenge and one I wish I had snagged before moving towards lower altitudes. Longs Peak is like the Everest for hikes north of Denver.

Golden-mantled ground squirrels = cute! Sorry to hear you weren't able to make the Longs Peak hike - this time. I look forward to hearing about it when you do it!