Where the Wild Things Are, Part One: Biscuits, Gravy, and Wet Wilderness

It's finally update time! Been working on getting ready for school (teachers report on the 12th), including a meeting with a fellow teacher on American Lit curriculum, setting up my room--yeah, I am finally getting my own room--and attending a workshop today. Really, it feels like I have already reported for duty, it's just a lot quieter in the hallways. But, let's talk about happier times, like last week, when Monkey and I were spending the week in Colorado with the Ambassadors.

Our drive from Oregon to Colorado was relatively uneventful, save for a nice view of Snake 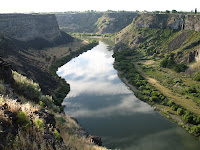 River Canyon near our overnight Motel 6 in Twin Falls, Idaho. Monkey and I stopped for a quick visit with friends in Fort Collins (a very cool town, it seems), before proceeding through falling temperatures and down-pouring skies to Estes Park, where we rendezvoused with the Ambassadors in the parking lot of the local Safeway. Apparently, our cabin was far off the beaten path, and it was easier for them to lead us to it than give us directions.

And, it was. After an additional 25 minutes of driving, through Estes, past Allenspark, and nearly halfway to Boulder, we hung a left past the yellow intersection sign (either an upside down Y or a K with its arm cut off...never did settle that one), and proceeded carefully up a packed (but wet) dirt road, a mile and a half up one ridge and down another, before reaching the secluded cabin that we would spend a week in.

Before we got out of the car, our companions told us to wait until the generator was turned on. Generator? Yup. Our cabin, while not rustic by any means, was powered by a generator that could only be run for three hours at a clip (with a two hour pause in between). While this did not interfere with the operation of the propane gas stove or the propane powered refrigerator, it did leave us without power for all but the darkest hours, and precluded us from showering and flushing toilets during non-generator hours. Minor hardships, of course, most obvious at bed time, when, after the nightly ceremony of shutting down the power, Monkey and I read by the light of our electric halogen headlamps, before turning in. Monkey especially found this humorous.

Breakfast consumed, we headed into the Indian Peaks Wilderness 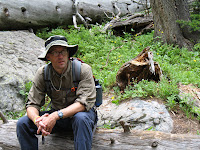 Area, rather than Rocky Mountain National Park, itself, to enjoy a hike along Lake Isabella and up to Isabella Glacier. The skies were gray as we arrived at the parking lot, but we were up and off in good spirits. At a trail junction, where we crossed a small stream, I was pleased to get a close-up look at some ruby-crowned kinglets bathing in a small rivulet.

Unfortunately, along the trail, I became dizzily aware that I was still acclimating to the altitude. We started the hike at about 10000 feet and climbed to over 12, and I was pretty woozy for much of it, but, I was digging the trail so much, I simply walked on. After this first hike, I was good for the remainder of the trip.

Also unfortunately, we didn't quite make it to the glacier. 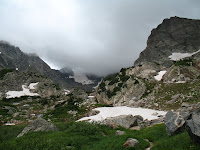 As we climbed to the vicinity of our hike's terminus, scrambling over rocks and gingerly sloshing (can one gingerly slosh?) through snow melt streams, a bank of clouds came menacingly over the ridge before us. We were in pretty open territory, so we decided to call it a hike. On our return, the rain followed us down, falling on us intermittently, but never dampening our spirits.

For more photos (including adventures not yet revealed), click here.
Posted by ATR at 4:32 PM

Tony, reaching treeline at ~12,000 feet on your first day is impressive.

I've been remiss in commenting, and I am so sorry! You've posted so much great stuff about your vacay, and the pics were super. Love all the hathathat and marmots. Way to hang tough with the elevation and the sleet.

Hey, Sister! What, have you got a kid to deal with, or something?