The Black Hills of South Dakota take their name 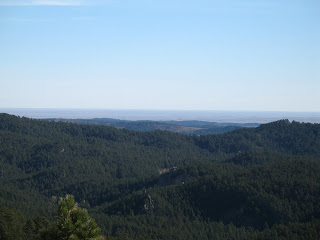 from the Lakota Sioux who considered the area sacred. Paha sapa they are called in Lakota. They are an interesting formation, a sort of oval range, alone in the plains, surrounded by a valley playfully called the racetrack and containing several peaks in excess of 6000 feet. It is no wonder that many American Indians considered this area to be some sort of ground zero for creation. It is like a ragged, jagged Garden of Eden that Monkey and I were set to explore.

An early Monday night (after a meal of pork and sauerkraut at the Horse Creek Inn), led to an early morning at the table of our hosts at Emerald Pines. Mrs. Pines cooked up a scrumptious breakfast of french toast and bacon, with plenty of hot coffee, and some scones on the side. Monkey and I were well fed as we headed out to gaze upon the grandeur of Mount Rushmore. 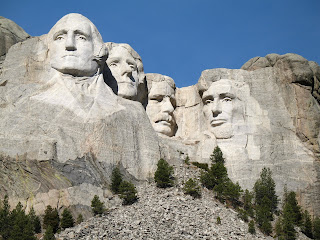 I was prepared for a tacky 1960s-style North-by-Northwest version of Mount Rushmore. Something along the lines of a Graceland for George Washington, a gift shop full of shot glasses and rubber tomahawks, and coin operated telescopes. I did not get what I expected (except for the coin-op scopes).

Mount Rushmore is a pretty amazing sight. No doubt, even had the gift shop been full of plastic, glow-in-the-dark models of the heads, even had the cafeteria been doling out Mount Rushmore versions of Klondike ice cream bars, the monument itself would be spectacular. It was made more spectacular by a gorgeous day: clear, slightly windy, a bit of a chill in the air (some who came from the lowlands were in shirt sleeves). It was made even more spectacular by the off-season crowd.

Not many people were around on this fine late October Tuesday. It was great. We took a guided walk around the monument and trail around the grounds, and got to spend twice as much time with our Parks Service guide than we would have 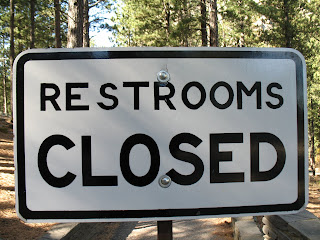 been able to in the summer. It was an awesome sight, and the interpretive center and museum were fascinating. I won't go into some sort of Modern Marvels shpeil about the wonders of the work that Gutzon Borglum and his crew did, but I will say that it is a story worth investigating. I would like to take this opportunity, however, to alert anyone thinking about taking a trip to Mount Rushmore in the off-season: use the restroom at the welcome center before you walk the trail around the park.

Another warning that is worth disseminating: be wary of belligerent burros while driving through Custer State Park, our second destination of the day. Near Wind Cave National Park, 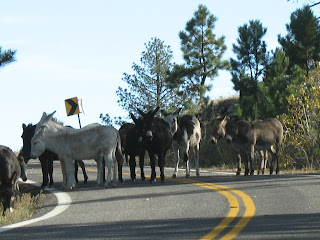 Custer is a large state-owned piece of land that is home to "wildlife-at-large," like so much of this area of the western US. We were amazed to see a herd of bison watering at a hole just a few hundred yards from the park's borders. After gazing in wonder at these magnificent, seemingly docile beast (yet we were warned by signs that they are "dangerous"), we motored on, only to be waylayed by a herd of wild burro astride the park road. We stared at them, and they stared at us. We inched The Penguin forward, they held their ground. We sat stalemated for a good fifteen minutes before these belligerent burros decided to let us through. 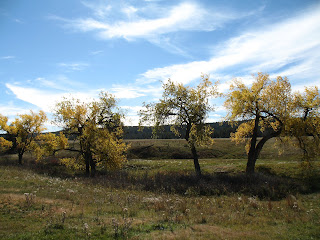 Beauty was everywhere on the other side of the asses. Not only in animal form, but the few deciduous trees still in leaf were blazing in color. against the backdrop of the grass and pines, they stood out, little accents to this western American Garden of Eden.
Posted by ATR at 5:37 PM

This sounds like it was a great trip! I'm loving the pictures and the details of your adventures.

It's a spooky, soulful season. May you enjoy your Mischief Night, Halloween, Day(s) of the Dead, and All Souls Day. Spirits and chocolate, woo hoo!

(Seriously, that really was the captcha word. It's like being visited by the spirit of my Halloween costume from last year!)