Unexpected Visitors (Another in an Irregular Series of Very Long Stories), Part Three: The Mountain Doesn’t Care About You

When she's on her best behavior

Don't be tempted by her favors

Never turn your back on mother earth.

--"Never Turn Your Back on Mother Earth," Neko Case

After the previous day’s hike to the glorious Lake of Glass, I made a disastrous miscalculation that had a detrimental effect on our mid-week hike. I normally take even the shortest ramble with essential gear that might be needed in an emergency. The minimum amount of gear I usually hike with includes: matches, compass, map, fishing line and hook, multi-tool, rain coat, fleece jacket, water, food, and some small piece of rubberized material that could be used for shelter. It is usually a heavier pack than most would carry, but I like to be prepared for at least a chance to survive should the worst occur. Most survivalists suggest you carry more than this, but, to me, this is the bare minimum. Unfortunately, after two great hikes with balmy temperatures and few clouds, let alone rain, I decided to lighten my load and leave my fleece at the cabin.

The lighter pack was a welcome change. Every pound makes a difference when you are carrying it on your back, and today’s hike to the summit of Flattop Mountain featured more altitude gain that our previous hikes. We left early from the Bear Lake trail head, avoiding the cramped shuttle bus this time, and the start of our hike was morning cool. However, from the start, we were on the ascent, and the lighter pack put a little spring in my step.

After about a mile and a half of “upping” through predominantly aspen forest, our first stop was a gorgeous overlook that provided a bird’s eye view of Dream Lake. From this vantage point, we could also look along Glacier Gorge where we had hiked yesterday. The river’s white water, bursting with runoff from the surrounding heights, looked like a line of snow through the middle of the valley. 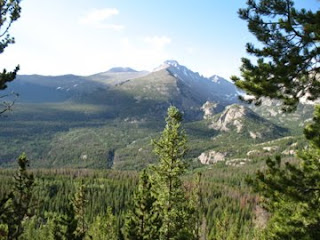 We continued on, climbing higher still, until, at about 11000 feet, we reached the timberline, where trees became shorter and sparser. Soon, we passed out of the trees. Above, the skies began to darken, and the wind whipped along the ridge. Behind us, I watched as the moist air rose up the windward side of a peak and began forming a cloud on the leeward side. It was an amazing sight, but it made me a bit nervous about the weather.

After a few switchbacks, we came to another overlook, which provided perilous views of Emerald Lake, which seemed to be directly below us. I imagined that, were one inclined, a person could leap from the overlook and do a perfect swan dive into the lake’s dark waters. Of course, that perfect swan dive would be the last dive of that person’s life, but it would be a wild last ride. 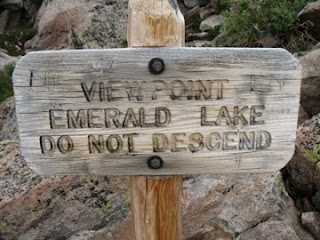 Needless to say, there was no diving from our party. But, the wind was picking up in intensity, and the temperature felt like it was dropping quickly. I pulled on my rain jacket, hoping it would act as a sort of wind breaker, but it only provided momentary relief.

We plodded on, through the alpine tundra, reaching heights of about 12000 feet. At one point in the trail, there was a sign, informing hikers of weather dangers above the treeline (lightning and white outs in all seasons). The eye-catching bold print at the top of the sign: “THE MOUNTAIN DOESN’T CARE ABOUT YOU.” No kidding, I thought, blowing on my frigid fingers. The mountain-side view was awe-inspiring, and, as I kept a watchful eye for a possible ptarmigan (an alpine bird) I enjoyed a few peeks at the ever-present, ever-squeaky pikas that frequent the rocks at this altitude. But, boy, was I getting cold. 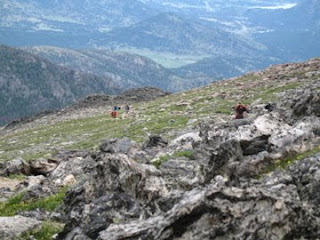 We continued along the rocky trail, and could see, over at least one more ridge, the summit (which is more like a really flat plain (i.e., the mountain’s name, I guess). As I walked along, I noticed a young girl, maybe 14, huddled in a little rock cave at the side of the trail.

Which was exactly what I was trying to do.

As we rounded one more bend in the trail, and I saw how much farther we had to go, I had to surrender. I knew now (I had seen it in print) that the mountain did not care about me. I also knew that I had made the worst possible decision by not bringing the proper gear. After consulting with the rest of the party, we decided to chalk this one up to Flattop, and try to tackle the old man on another day.

On the way back, the young girl was still huddled in the cave, looking less than comfortable. I noticed that she only had one glove. I decided to give her some advice. Yes, me, the bone head who didn’t bring a jacket, but still. I suggested that she get up and start walking back toward her dad, since sitting on the side of a mountain in the freezing wind was probably not going to keep her warm. She took my advice, and, after she’d walked about thirty yards, her dad came around the bend. So, its not like I saved a life or anything.

We headed back down the trail, desperate to get back below the timber line and out of the wind. Once we did, it took a while to get the blood moving, but we eventually warmed up. I was pretty angry at myself for being unprepared. Were we disappointed that we hadn’t reached the summit? Absolutely. Were we glad we’d followed the old cliché of discretion being the better part of valor? I was.

This is the reason why I confine my hiking mainly to city blocks!

The Aim, she *does* care about you and maybe should post a sign indicating such. Since you've resumed blogging - and in quite a flurry, I might add - I've gotten woefully behind. Strange to be reading these posts as you're presently gearing up for the start of school. Time is slippery these days.

The Aim, she is also quite sleepy so this will be my one and only comment for tonight. :( More soonishly.