Our Tuesday hike was planned to Sky Pond, approximately 10,000 feet in the mountains, and about five miles from the Glacier Gorge trail head. Glacier Gorge has been the site of some beautiful hikes over the past few years--to Mills Lake and Black Lake to name a few. It is also a major view from the north side of Longs Peak, where you can look down from 13000 feet and see an entire valley of shimmering alpine pools. 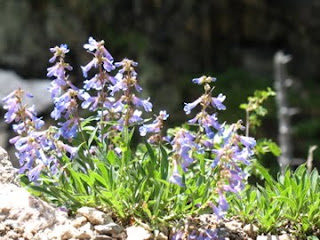 The day itself started well, as the ranger who greeted us at the park gate gave us a detailed forecast (unlike a different ranger a few days later), but then turned on an admittedly sour note, as we arrived at the park far too late to get a parking spot at the trail head. We had to park at a satellite lot and take the shuttle. By the time we got to the park, that meant an overcrowded park bus with more than one screaming child on it. This was not my idea of a pleasant ride; however, we survived, and were soon making our way under clear blue skies along the raging torrent of snow melt that filled the gorge and turned Alberta Falls into a most impressive spectacle.

The trail rose, along with the river, and then rose above the river. We trekked along to a trail split, with Mills Lake hikers (not us) heading one way, and Sky Pond hikers (that’s us) heading another.

Our first extremely beautiful spot was the Loch, a gorgeous lake, where we stopped and had a snack and snapped some pics from an awesome lakeside rock perch. Monkey and the rest of us were able to eat our snacks without being accosted by any birds, but I did spy a Clark’s Nutcracker in the trees across from our rock keeping a watchful eye on us. 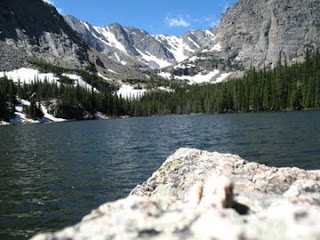 After a snack and a breather, we were off for Sky Pond. We wended our way along the banks of the rushing creek, spying the occasional fly fisherman and taking in the constantly picturesque setting. After a while of hiking along wet trails, we began to encounter sporadic banks of snow. As we passed a few out-bound hikers, they told us that ahead of us the snow was too treacherous to continue much farther. Undaunted, however, we continued on. 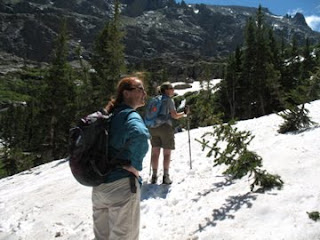 But soon, we did come to longer stretches of snow-covered trail, and soon, an expanse of ascending white stretched before us. At this point, two of the party settled in to wait, while the other half splay-stepped up the snow. At a halfway point, I (being one of the thru-hikers) consulted with my partner, and, thinking we had decided to climb some rocks to out right, headed off that way. But, I was mistaken, and my partner headed off to the left. I had some great views back down the gorge from atop the rocks, but I soon realized that I had misunderstood, and I scrambled down the rocks and headed back across the snow to meet up with my climbing partner.

We shuffled along a snow ridge and found ourselves at the base of a scramble from which a chilly waterfall descended. We paused to consider our options and consult with another hiker returning from the top of the scramble. He told us it was not too hard and completely worth it. We followed his advice.

The snow was cold, and we had to climb through most of it on hands and knees, so, after a few minutes, the palms of my hands were burning with that “I have been making snowballs without my mittens” kind of cold. Soon, however, the snow bank ended, and we scrambled over twenty yards of rocks to reach the plateau on which we found the wind-blown (and totally misnamed) Lake of Glass. 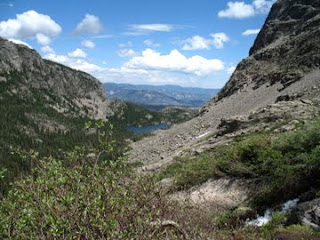 From here, the view down into the valley was even more vista-riffic. And beyond was Sky Pool. The skies were starting to turn a bit, and it was getting later in the afternoon. Also, half of our party was waiting a few hundred feet below for us to return. We decided to make Lake of Glass our turn-around point for the day. 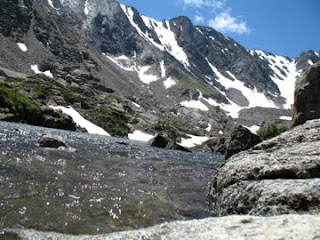 On our descent, we watched a marmot (one of my favorite animals, you may know), as he made his own way up the snow bank to the rocks above. As he walked he had a peculiar gait, his front end low, and his tail high in the air. His back legs were spread wide, and his bottom was lifted as high off of the icy surface of the rock face as he could get it. At first, I thought he was mooning me or showing me some other form of whistle pig disdain. I soon realized, however, that he was merely trying to keep his junk dry. Another unexpected visitor teaching another unexpected lesson: yesterday’s gray jay teaching us not to wave our apples around; today’s groundhog demonstrating the most effective high-altitude method to avoid shrinkage. Emerson and Thoreau were correct: nature is this planet’s greatest teacher.

Back below, reunited with the rest of the group, I enjoyed a PB and J, and a few minutes of relaxation as I sat on a dry spot, with my back against a rock. I said a little prayer hoping that if I died at exactly that moment no one would ever move me from that spot, and that my junk would stay perpetually dry.

A) I cannot believe it's taken me two days to comment since your post. 2) I skimmed the parts about the scenic vista-riffic-ness but reread the marmot section because it is simply priceless (though for you, $3) and I'm immature like that. iii) What about "junks" instead of "junk"?

A) This may be the worst outline I have ever seen. 2) Whadisay?. iii) a marmot with junks would be either the a) envy of all marmotdom, or II) a laughingstock.