The snow and ice fell on Monday, followed by righteous prairie winds. Monkey and I had a report from a driver that the road to Omaha was relatively treacherous and the wind was fierce. We decided not to travel out for Drive By Truckers. Perhaps we missed a great show, but a two hour plus trip one way (estimated due to conditions) followed by the same to return was not a pleasant forecast. Nor was three hours of sleep. Call me lame, but, I think we made a wise choice. Granted, I don't get to tell a story like this, but, that will just have to be okay. 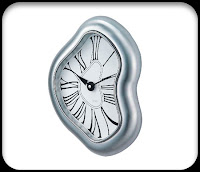 Saturday's housewarming party was nice. We had more than twenty people show up. This may not seem like much, but, for us, it was a mob! Unfortunately, the party was over by 10:30. Does that mean all of our new aquaintances a) are old, b) are lame, c) secretly don't like us, or d) all of the above? Or, is there another, more benign explanation?
Posted by ATR at 3:57 PM

I think you need to do the "I'm getting so old" post.

Using myself (naturally) as the gold standard for such considerations, I'll say this: I usually don't act too cray the first time I meet people - especially at a sophisticated house-warming event. It's important to try to match one's behavior with the norms and tone of the particular setting. Being in someone (else)'s home - especially for the first time - calls for a fitting level of appropriateness and reserved manner.

Also, how can one dance on the bar when (presumably) there is no bar on which to dance? Same with swinging from chandeliers? Besides, if people had stayed late they would have run the potential risk of being perceived as late-lingerers and moochers.

However, if you'd put in a compelling film and served delectables such as, say, popcorn and peanut M&Ms, all bets would be off and you could anticipate hanging into the wee hours until you shooed them forcibly from your home!

(I couldn't resist. I can't help it: I'm feeling reminiscent. Except for the forcibly and the bar-dancing parts. You know what I'm talking about, my brotha.)

Whenever we finally get totally settled into our place, I imagine we'll have some sort of shindig. We can compare notes then. Of course, squeezing in a lot of people would present a challenge of an almost phone-boothian magnitude, but you give us youngish folk some liquor and limited room to move around and you got yourself a late-night event!

Anon AMVB, she misses you and Monkey

You would have had to kick me out - but only after allowing me to karaoke for your amusement for hours. Harper Valley PTA anyone?

I do that one every time...

I don't know what you're talking about, and, if you know what's good for you, neither do you...

That very experience, for better or worse, is the gold standard by which I judge all future house events. Harper Valley PTA, indeed!

Oh these comments make me happy!!!

First--I refuse to be "getting so old."

Second--La Fashionista, you are pushing it. I might have to come over and reiterate The Rules to you.

James--Harper Valley PTA was EXACTLY what came up in the post-open-house-party-debrief that ATR and I had on Sunday. Clearly, the standard has been set high.

What?! How can I help myself from the reminiscing when T/F is so close, you just had a housewarming party, yesterday while running I was missing the Katy/MKT trail like crazy, The Vagina Monologues are happening on campus this week, and today I wore one of the necklaces I made in jewelry class? The nostalgia overwhelms!

Sentamentality is one thing. Breaking cardinal rules is quite another!!!

This is sort of a curmudgeon-like blog now that you mention it. If only you were curmudgeon-y in appearance.