An overcast day in Firenze greeted us as we dined on cereal at the B&B. Our host, Bruno, offered 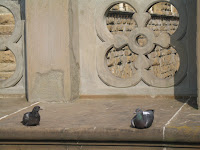 us an umbrella, and we took him up on it. We had afternoon reservations for the Accademia Museum, so we decided to fill our morning with more reliquaries and, perhaps, some shopping.

Our first stop was the Chapel of the Medicis, near San Lorenzo. There was a small admission charge, as there seemed to be at every place we went in Firenze (except the Duomo). Inside, the first floor was non-descript, and hard to figure out, since they provide little in the way of interpretive signage or literature, either in English or Italian (or French or German, for that matter). We managed to figure out that we were in a large room that housed the tombs of at least two dozen lesser lights of the Medici clan. And, of course, around the room, in vitrines for display, the gleaming wealth housing the bones of the saints.

Speaking of saints, this trip, among many things, opened Monkey’s and my eyes up to the fact that we don’t know much about the saints of the Catholic church (nominally, our faith of heritage). Granted neither of us are practicing Catholics, and I, myself, am dedicatedly unreligious, maybe even unspiritual (I have been accused of being “dead inside”), but, in our youths, we got quite a bit of schooling and indoctrination in the faith. However, on this trip, it was clear to us that these Italian Catholics are major league players. By comparison, we were, even in our Communion-taking heyday, no better than a traveling squad of barnstormers, playing state fairs for half the gate (okay, maybe a bad sports analogy, but, this is my show).

Case in point: Saint Zenobius. Who? Exactly. But this guy was everywhere. Every church had a fresco, or a polyptych that either took a Zenobian miracle as its subject, or included the man in the line up of admirers of Madonna con Bambino. We had never heard of this guy. This seemed like a huge gap in our knowledge. After all, if the guy cured the blind and raised the dead, and, as we learned, always won the bike in the conversion drive at his grade school, why hadn’t we heard of him? Especially since Italy seemed to be crawling with propaganda celebrating his triumphs. Well, here’s why: it turns out, he is a native of Firenze (born and raised in the 3rd century or so). He’s the patron saint of the town. Another bad sports analogy? St. Zenobius is to Firenze as Cal Ripken is to Baltimore. So, while he IS the Mack Daddy of Firenze, outside of town, he’s just a minor saint. He looks good in a miter, though.

Now, as I said earlier, the Medici Chapel is pretty plain on the first floor. I was surprised by this. 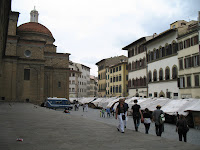 We’re talking about one of Firenze’s greatest families, the clan responsible for some of the best (and worst) moments in medieval Italian history, some seriously wealthy folk. What was up with this cement and brick snooze-fest of a chapel? The answer, my friends, was just up that little stairway to the back of the building. Shall we?

At the top of the stairs, Monkey and I walked into a chapel of grand magnificence (you know, not just regular magnificence). Walls, ceilings, floors were all gleaming black marble with colorful inlaid designs and crests and such. The chapel held six tombs of the big name Medicis, and each tomb was more ornate than the last, and, atop each, a larger-than-life marble statue of the deceased. Ostentatious, as well as impressive. Behind the altar, in the sacristy, were a few displays of priestly garb and equipage, as well as a few dozen more reliquaries. But, in another chapel, just down the hall, there was more to see.

Another small chapel, this one in white marble, held the tombs of Lorenzo Medici and his brother Giuliano, each topped with a pair of statues sculpted specifically for the purpose by Michelangelo himself. In all, the four statues represented Dawn, Day, Twilight, and Evening. And with that, this was clearly the Medici-style chapel I expected to see.

Leaving the chapel, we wandered to the steps of the nearby San Lorenzo church, where we 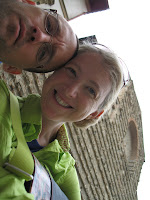 planned our lunch strategy: after wandering through the open air market in the piazza, we would peruse the nearby central market and buy some bread and cheese and fruit, and have a little picnic on the steps of the church. This was a great plan that started off without a hitch, as we bought some cherries and some cheese and a loaf of bread, but, as we sat down to eat, we were immediately surrounded by every pigeon in Tuscany. We packed up our stuff in a rush and moved down to a different location, across the street and down a little way from the piazza, but, after only a few moments, the flying rats found us, again. We grabbed our stuff and headed to the museum, not knowing where or how we would eat. (By the way, I don't know why this photo is oriented this way, I've rotated it on my hard drive, but it keeps popping up here in an un-rotated fashion. Any suggestions as to why, technophiles?)

After nibbling on a bit of bread and cheese while standing outside the museum, I decided to walk the remainders of our meal back to the B&B, where it could wait for us when we returned. I didn’t want to have to schlep our groceries through the museum. So, a quick-footed 25 minute round trip brought me back to the Accademia, where we prepared to be awed by the large hands of David.
Posted by ATR at 12:55 PM

Your experience with the pigeons reminded me that I forgot to warn you about the crazy giganto mosquitoes in Firenze and Milano. That's another story (mine) for another time. I hope you had no such noteworthy mosquito experiences.

Dude, what's with you both and the crazy short hair? I mean, Monkey looks good (of course), but Reda that short hairstyle makes your awestruck expression look more... puzzled.

This is a great refresher on Firenze. We experienced some walled-city burnout after a while.