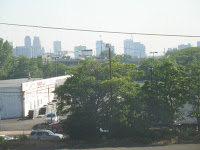 Monkey and I woke in our plush accomodations in Newark (home of Cory Booker--good luck, man) and shuttled back to the airport to check in on the status of our flights. After multiple visits with multiple airline ticketing agents and other officials, we got our boarding passes for our afternoon flight to Milan and then spent some time hanging out in the spacious Newark International Airport.
The weather seemed fine in Jersey, and we boarded our flight and took off with no hitches at all. The flight, which I was not particularly looking forward to, while long, was pretty comfortable. I read, listened to some music, finished a game of travel Scrabble with Monkey, slept a bit, and generally managed to occupy my time and emerge at the other end of the trans-Atlantic leg of our journey, having passed from yesterday afternoon in Newark, New Jersey, to this morning in Milan, Italy, feeling relatively refreshed.
Once we passed (effortlessly) through customs, we found the bus that would take us to the train station, boarded it, and rolled away from the terminal of Malpensa Airport. Within minutes, we pulled up to another travel terminal-type building. Monkey was perplexed. The bus tickets had cost 7 Euro apiece. Monkey felt that this was too high a price for a five mninute bus ride, even on a double decker bus. I assured her that this was merely the other terminal of Malpensa Airport, which it was. She was happy to hear this.
The remainder of the bus ride took about 45 minutes. We sped down the autostrade, and winded (wound?) our way through the grafitti-filled streets of Milan to the train station, where we purchased our tickets on the next train to Firenze. The wait for that train was about 45 minutes, and the train ride was to be about 2 hours. It was strange and wonderful to stand in the station as the trains pulled in and out, watching the people come and go, and hearing the smattering of indecipherable conversations as people passed.
Once aboard the train, we rambled through the urban Milan and then the countryside of the Emilia-Romagna region and Tuscany. Arriving in Firenze with walking directions to our B&B, we wheeled our luggage through the cobbled streets of the central city, and, with some debate and distraction, found our address.
It was hard to stay focused on where we were going for two main reasons. The first, I was 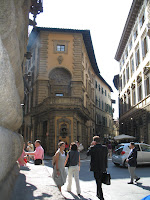 wary of ne'er-do-wells (whom were NEVER a problem on the entire trip, but, I've told you of my "urban area paranoia" before). The second, everywhere you looked, there were amazing things to see: people, eight-hundred-year-old buildings, churches with gloden doors and marble facades, restaurants, store fronts, signs, scooters and motor bikes, carabinieri, polizia, Ethiopians selling hand bags and sunglasses, tour guides carrying around all manner of things on sticks in order to maintain visiblity for their tours among the throngs of other tourists in the crowded piazzas and streets. Wow!
After we checked in, we stowed our gear, checked our maps, and strolled the streets to get a taste of the place. We had decided on a place for dinner and our host had made reservations for us (at the ridiculously early hour (we learned) of 7 pm). We strolled past the Uffizi Gallery, past the pink and green Duomo (Basilica di Santa Maria del Fiore, whose dome was designed by Brunelleschi and whose campanile was designed by Giotto. We meandered the winding streets to the Ponte Vecchio bridge. We stopped at a little focaccieria for lunch and had some pretty mundane sandwiches.
Dinner, on the other hand, was great. Trattoria Cibreo, where we ate, is a little place that is 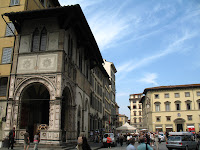 served by the same kitchen as a larger restaurant owned by the same folks. The menu is about the same, with fewer choices at the smaller place, and (even better) more affordable prices. We dined on a crostini with pate, a bread soup, a mushroom soup, and a polenta that were all phenomenal. We also enjoyed the house wine (no idea what it was). We probably would have ordered more food, but, our mediocre lunch had been quite late, and we didn't have a huge appetite. This was poor planning on our part, but, it was a mistake we never made again!
After dinner, it was gelatto time. Monkey, as is her inimitable way, had done quite a bit of homework on restaurants and gelatterias, so, she knew where she wanted to go. We found Gelatteria Neri right where we expected it to be on Via dei Neri. After a few tastes, Monkey decided on her flavors. I forget what she got, but a good bet would be chocolate and banana. Whatever they were, I do remember that they were very good.
A leisurely stroll back to our home base, and, with no real feeling of jet lag at all, we brought our first hours in Firenze to a dreamy close.
Posted by ATR at 6:09 PM

Great pics and description! I love the part where you talk about your difficulty navigating the city because of all the wondrous things around you. I can just imagine you taking it all in, and that makes me happy.

Not as cool but pretty cool nonetheless: I'm blogging wi-fi style at our condo's poolside!

How about those train stations, huh? Wouldn't it be nice to have a few of those here in the mid-west? Imagine True/False only a train ride away.